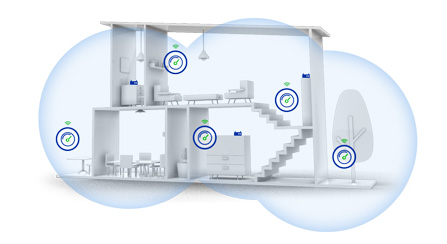 Have you ever experienced dead spots on the wireless internet inside your home? Wi-Fi is not always reliable. Due to most routers’ limited coverage and reach, internet signal can be prevented from penetrating rooms by objects like walls, appliances, and other most cemented surfaces. Sometimes, even if your Wi-Fi is fast, different spots in your own home can have different internet speeds.

Most appliances are now entirely heavily Wi-Fi internet. Technology has forged its way through the homes of more and more American homes. The term “Smart Homes” is thrown around with the concept. Imagine being able to control your house from anywhere around the world with just a push of the button.

However, the dead spots of Wi-Fi routers are preventing the complete interconnectivity of modern appliances. Because of dead spots and problems with coverage areas, most are inclined not to go for Wi-Fi-connected gadgets. Nevertheless, modern technology has found a solution to this problem. Wi-Fi Mesh Networks are now available for home use.

Vic Hayes began working on the concept of Wi-Fi in 1974. Wireless networks were first under the name “WaveLAN.” The Commonwealth Scientific and Industrial Research Organizations (CSIRO) then registered patents regarding Wi-Fi while experimenting on exploding mini black holes on the atomic scale.

In 1999, this technology was expanded and upgraded. The term “Wi-Fi” was used as a pun on “hi-fi” or “high fidelity,” a movement in sound mixing which involves inaudible noise and distortion within the human hearing range. All aspects regarding the Wi-Fi system have been nothing but upgraded since then. Most Wi-Fi routers can now accommodate a net data rate of 20 Gbit/s per second.

While Wireless Mesh Networks have long been available for military use, it is only recently that they have been made commercially available to the public. A mesh network for Wi-Fi is a system that involves a modem and a series of satellite hot spots, modules, and nodes to prevent dead signal spots all over the home.

Internet signal dead spots are the products of obstructions like concrete surfaces and metal appliances. A wireless mesh network solves this problem by providing the same speed of Wi-Fi across different spots inside your home. This system is highly customizable and will not need any Wi-Fi extenders. Even when a node goes down, the whole system will not go down. You can still get internet anywhere in your home.

Integrating Gadgets to the System

The most basic thing you can integrate into your system is integrating basic communication systems. Spare your house from installing P.A. systems. Enjoy communicating commands to your appliances from anywhere.

Virtual artificial intelligence applications like Alexa and Siri are readily available for most modern appliances. You can order your microwave to start heating your meal from your garage by just talking to your phone. Open your garage just by talking to Alexa from the inside of your car.

Most suppliers of these Wi-Fi mesh networks have solutions to install such systems to your old appliances and connect them as well. Bring them in for appliance repair and upgrade; see these old school appliances transform into modern miracles. You can even install nodes inside these appliances and make them sources of the internet. You will never be restricted by the length of your LAN cable or Wi-Fi signal coverage anymore.

Meta Title: Benefits of Transitioning to a Wi-Fi Mesh System

Meta Description: Dead spots have always been a problem for plenty of homes with multiple rooms. Consider upgrading to a Wi-Fi Mesh System and step forward into the future of connectivity.